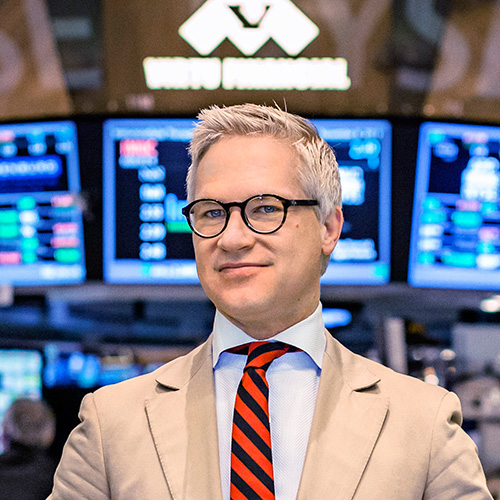 Markus Koch has covered Wall Street and the stock market for well over twenty years, and is credited for becoming one the first reporters to broadcast live from the floor of the New York Stock Exchange. He was nominated for the German Television Award, the Business Journalism Award of the German Derivates Association, and recently received the prestigious Friedrich Vogel-Award for outstanding business journalism for one of his many behavioral finance based Web-productions.

1994 – present
President and owner of New York based Wall Street Correspondents,
Inc. Created in 1994, the production company focuses on a wide range
of financial markets content mainly for the German language market.

2008
Produced and Anchored German television broadcast series “In 70 days
around the World”, exploring the growth potential of the Emerging
Markets.

2009
Produced and anchored “In Between”, a short film series focusing on the
human aspects of finance and economics in the aftermath of the financial
crisis. www.youtube.com/watch?v=JVwGo5-L_hA

2009
German Illustrated Book Award nomination for “Backstage Wall Street”,
for capturing the spirit and behind the scence glimps of the New York
Stock Exchange and its community of financial experts on Wall Street.

2010
Produced the German language edition of “Floored”, a documentary
focused on the technology-driven revolution shaping the lives of floor
traders at the Chicago Mercantile Exchange. www.youtube.com/watch?
v=a9dbrVClCj4

2011
Produced and anchored “Iron Trader”, the first web-based stock trading
competition that combined a casting show with web based gaming.

2015
Produced the German language edition of “Four Horsemen”, a british
documentary focused on the state of the financial markets and economic
system. www.youtube.com/watch?v=G5KilKdGlg8

2016
Nominated for best economic reporting by the German Derivates
Association for the short film “Moby Dick – a lesson for Investors in
dealing with fear”. www.youtube.com/watch?v=-vSdfUXyzDo

2017
Produced DWS Investments Web-Series “Ach du liebes Geld”, about the
psychology of investing and why people do what they do. With 8 million
views on YouTube and Facebook, one of the most watched financial
markets Web-Series in the German language space. Received Bronze
from the New York based Midas Awards for best financial advertising.
(www.achduliebesgeld.de)

2017
The production of the show series “Auf der Couch by Markus Koch”
receives the award for outstanding business journalism from the
Friedrich und Isabel Vogel-Stiftung.