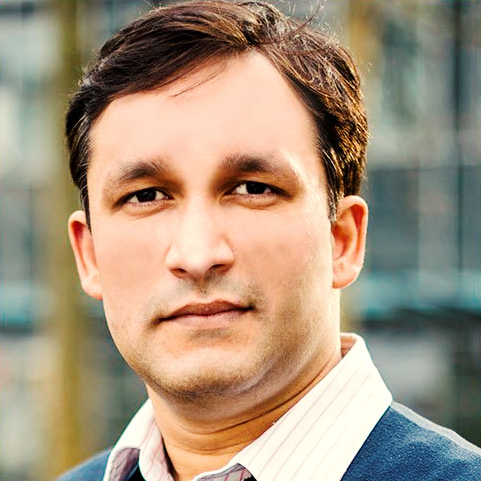 Gunjan is the Founder and CEO of the Innoplexus group. He was earlier with the Boston Consulting Group and before that the leader of the global business performance think-tank of Ernst & Young and a manager in the German practice with a solution focus on strategy and innovation. He has led projects in strategy, analytics and technology for various clients in different parts of the world.

Gunjan was also a partner, senior-editor and advisor for a prominent online innovation management journal and was a member of the scientific advisory board of a US based not for profit institute researching in complexity sciences in the healthcare industry. Gunjan is also a guest lecturer at the European Business School for growth management based out of Frankfurt, Germany and FIA Business School in Sao Paulo. He has also been in the advisory board of a Future management initiative of a big Pharma company in Germany. He was also an honorary representative of the state of BadenWürttemberg to India.

Gunjan has been publishing in many scientific and business journals such as the Harvard Business Review, MIT Sloan Review and Journal of Service Research. He has also published a book on marketing in emerging markets. He has studied at IIT Bombay, Pforzheim Business School, MIT Sloan and European Business School.

Where is the top hub for AI in Europe?
Israel for Computer Vision even though Barcelona, Spain seems to get strong.
UK for Deep learning
Germany for Natural Language Processing/understanding
France for HCI-AI

Is the European ecosystem ready to power this deep tech revolution?
Yes directionally. Advances in deep learning have opened up areas of application that were considered out of reach for Automation. Many european companies are seeing a viable opportunity space in AI and are warming up to ideas that are typically home to the valley. Innoplexus itself is building many Continuos analytics tools for European clients and partners. Europe needs to do more in expanding the digital infrastructure and really invest in a culture that embraces failure.

Why is speed the blood of artificial intelligence?
I choose to differ, its the data that’s blood of AI. Speed comes from computation, which is increasingly becoming a commodity. That is also the reason why Innoplexus started building its own Data as a Service Platform called iPlexusTM in the beginning. A high degree of specificity in the data play doesn’t augur well for the context. There is a need to build vertical contexts of data that would help provide continuos analytics. Data that would come into AI engines will be hence context aware. This will also democratise its consumption and will open a bigger opportunity space for smaller enterprises to play with it for different use cases.

Why we should not fear artificial intelligence?
‚Its not the presence, but the absence of AI that’s killing people‘ as the CEO of Allen institute of Artificial intelligence once said.
Use of any technology depends on the wisdom of the user. When there is one accident attributable to an AI powered self driving car, heavens break loose. To err is human but AI even in its growing up years cannot err! Of course we need governance and a set of rules for fairplay. However it does not mean we fear AI, we need to embrace it and bring it to a wider set of problems that are waiting to be solved!

What is the most important technology change you have seen?
Its got to be Deep learning. Before deep learning, researchers in AI use to work on symbolic systems. This was all theoretically pleasing but it wasn’t solving real AI problem related to perception(vision/language/sensors). They use to assume that input will come magically in symbolic form. This never happened and AI went into phase famously referred as AI winter. Only after deep learning people started taking AI application seriously. It opened a completely new and an exciting opportunity space.